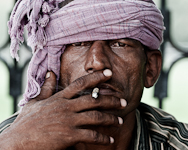 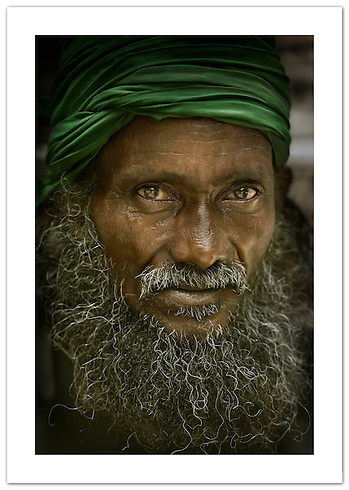 India is a fabulous place for photography – no more so than when it comes to its people.  Many Indians are more than happy to oblige if you ask to take their photograph, which makes for wonderful opportunities for impromptu street portraits.  In my experience, this is in stark contrast to the response you can expect in most Western cities, where most of us are reluctant to allow a stranger to point a camera at us at close range.  In fact, the problem in India tends to be that as soon as you are given permission to take someone’s photograph, they are surrounded within seconds by a crowd of family and friends, all wanting to be in the picture, so getting the portrait you hoped for becomes very difficult. You can also anticipate a small enthusiastic crowd forming behind you, jostling to see the result of your shot on your LCD screen, which can mean you have your work cut out to hold the camera steady.

However, the effort is invariably worth it, as many of the people I have had the pleasure of photographing in India are completely natural and unselfconscious in front of the lens, which makes it much easier to create a compelling portrait. 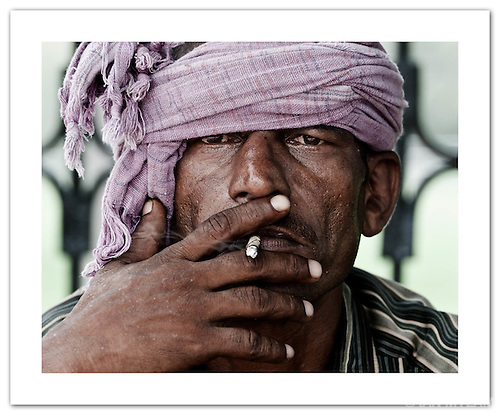 In terms of candid people photography in India, another problem is the extreme alertness of everyone on the street. Unlike in most Western cities, where people are often fairly oblivious to what is going on around them, as soon as you raise your camera to your eye, you will invariably be aware of several pairs of eyes looking back at you. Of course, being a white westerner, typically dressed differently, and looking like a SWAT team member laden down with camera gear doesn’t help in keeping a low profile either (guilty as charged!). Your best strategy is to shoot quickly if you want a candid shot. 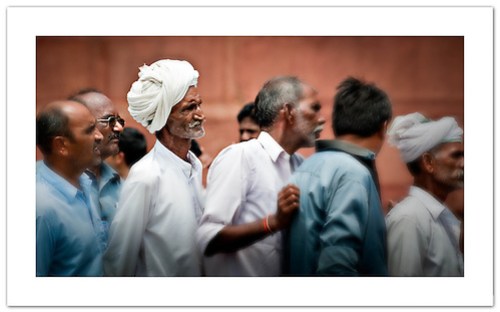 Work at becoming familiar with the angle of view of the lens you have on your camera, so you can as far as possible envisage the framing and composition before you raise the camera to your eye.  Consider manual pre-focusing to minimise the delay between raising the camera and pressing the shutter. And if limited depth of field or a blazing fast shutter speed is not an aesthetic requirement, use a smaller aperture (light levels permitting) to increase your depth of field and the chances of sharp focus.  If you have a camera capable of performing well at high ISO, this can help you here, as you can select a smaller aperture without fear of slow shutter speeds blurring your image. If your camera has an Auto ISO feature, this can also help, as you can set a minimum shutter speed you will accept, and allow the camera to raise the ISO as required up to a ceiling level you specify in order to maintain that shutter speed with the aperture you are using. In the fast-paced environment of street photography, Auto ISO can be very useful, as there is so much else to think about, including personal safety – it is easy to be distracted and step backwards into a stream of traffic, for example, as you adjust your composition.  In the “exposure triangle” of aperture, shutter speed and ISO sensitivity, aperture and shutter speed matter far more to me than ISO, provided that ISO is not so high that image noise becomes significant.  I therefore prefer to take control of aperture and shutter speed, and let the camera take care of ISO in this environment.  Auto ISO will also help you avoid shooting for the rest of the day at ISO 3200 after you raised it up there for your dark alleyway shot, as it will always select the lowest ISO possible consistent with delivering the minimum shutter speed you set. If you are unable to raise your ISO enough, either because the maximum ISO offered by your camera is insufficient, or because it produces too much digital noise in the image at the highest ISO settings, you may be forced to use a slower shutter speed than you can comfortably hand-hold without camera shake. In this case, apart from working on your camera-holding and shutter-release technique, consider setting your shutter release to burst mode. Camera memory is cheap, and shooting a rapid sequences of images increases the chances that one will be sharp, even at slow shutter speeds. It may also increase your chances of capturing the gesture or expression you want when photographing on the street, although shooting without thought in burst mode is no substitute for careful observation.  All these techniques will help minimise the delay between raising the camera and shooting, and allow you to focus on the creative decisions you need to make, helping you capture the shot you envisaged. 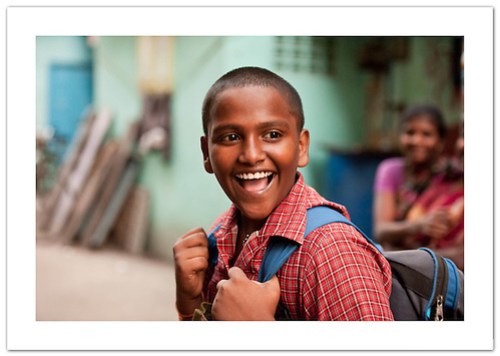 Candid photography is something which tends to polarise opinions, with some feeling that it is intrusive and an invasion of privacy, while others feel that it is quite acceptable.  My own view is that pointing a camera into someone’s face at close range, uninvited, before beating a hasty retreat, is definitely not acceptable; whereas discreet photography from a reasonable distance is generally OK – although of course there are other factors to consider such as local laws and the culture and social norms of the society in which you are photographing.  There is no doubt that some of the most iconic street images ever made would not have been possible if the photographer had first asked permission. The key thing in my view is to be considerate, be respectful of those you are photographing, and if someone asks you to stop, do exactly that. Do as you would be done by, in short, and you won’t go far wrong. 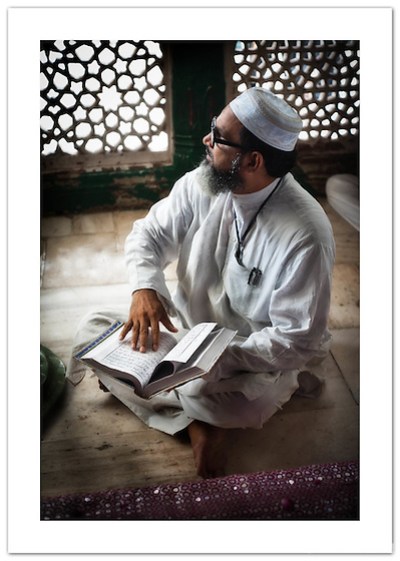 If you do decide to ask someone for a portrait, you may feel that the language barrier is a problem. In my own experience of photographing people in India and other countries where I don’t speak the language, and my subject doesn’t speak mine, it is rarely the case. You can communicate quite effectively without verbal language – the majority of human communication is non-verbal, and the fundamentals of human communication are independent of culture. The more time you spend building up some kind of relationship – however transitory – with your subject or subjects before asking to take a photograph, the more likely it is that your photographs will capture the essence and character of the person you are photographing. It builds trust and empathy between you, and that will usually be manifest in the images you create. 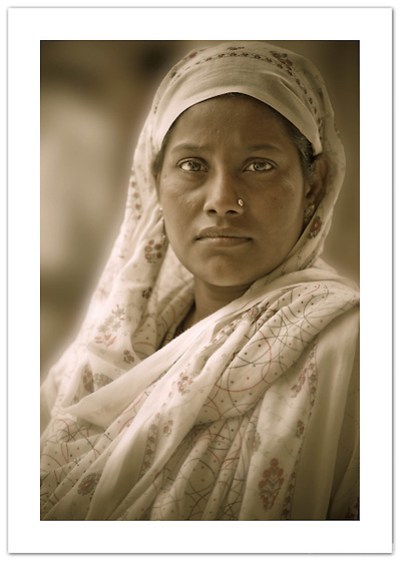 This also means not rushing unduly when making a street portrait, while simultaneously being respectful of the fact that the person you are photographing is giving you their time. In other words, take the time to briefly consider the light and how best to use it or modify it, check the background for distracting elements or competing colours, and if appropriate ask your subject to move a few yards to a more suitable location where the light or background better serve your creative vision. 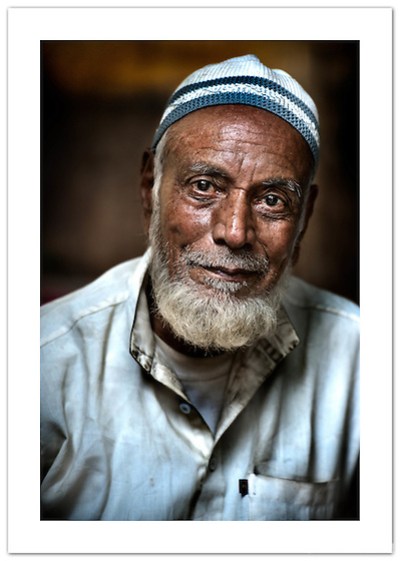 It only takes a few moments, and can make the difference between an average photograph and a great one. The person you are photographing has made the decision to allow you to photograph them, which is, in essence, a gift to you; by taking the time to photograph them to the best of your ability while being respectful of their time, you are showing them that you value and appreciate that gift. 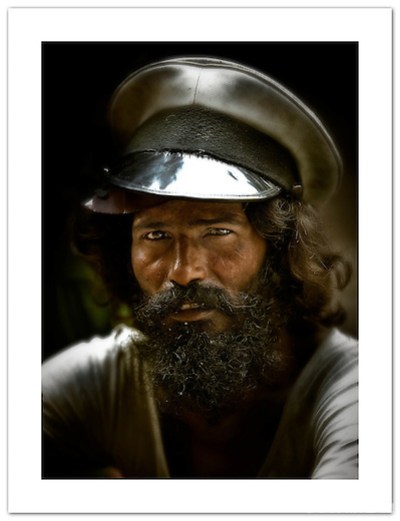 I am sometimes asked if I ever pay people for the privilege of photographing them when creating street portraits. The answer is “never”. I believe that apart from creating unreasonable expectation and queering the pitch for all the photographers who may visit in the future after me, something changes when you pay someone for the opportunity to photograph them. It feels different, and it is no longer a gift freely given and received, which is how I generally like to make street portraits. If I ask someone if I can photograph them and they insist on payment, I will simply move on, no matter how fascinating and charismatic they appear. 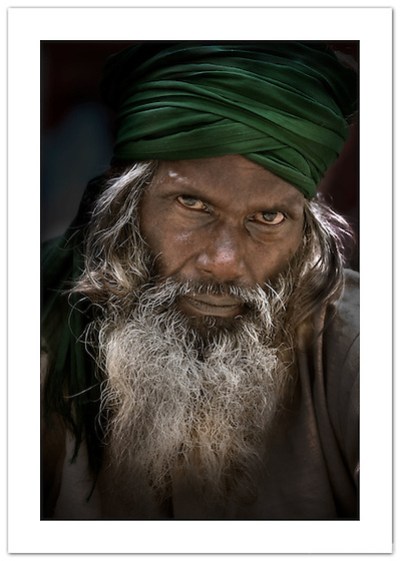 I do, however, often carry pencils, crayons, sweets, etc, to give to the kids I meet. And if I know I am going to be in the area for a couple of days or more, I have on occasion made the effort to find a local print shop and get the best images from the previous day printed, before returning to the area where I was photographing, and distributing the prints to the people I photographed the previous day. This, in my view, works far better than simply handing out cash for the privilege of being able to photograph someone, and is invariably very positively received. If you do this in a large Indian city, shooting images with GPS location embedded is very useful, as it enable you to check the exact location e.g. on Google Maps, so you can return to the same place the next day (street names and signs in Indian cities are virtually non-existent). 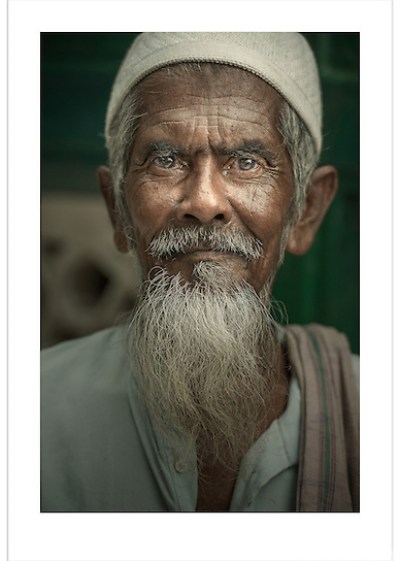 Do you have any thoughts on or experiences of street photography in India – or anywhere else for that matter – you’d like to share?  If so, please reply with a comment – I’d like to hear from you.