I’m in Chennai, India, about to fly to London. It’s a pleasant 29 degrees Celsius here this evening, or if you prefer, 84 degrees Fahrenheit. Either way, a lot warmer than London in December – and Denmark for that matter – which is where I plan to be by tomorrow evening, in time for Christmas, after some eighteen hours travelling by aircraft, train and finally car. The months of December, January and February are a good time to visit Chennai, in contrast to the Northern-Hemisphere summer months, when it can be uncomfortably hot and sticky.

Yesterday, I left my hotel at 04:30 a.m. while it was still dark and caught a bus to the beach to be there before first light. I strolled for a couple of miles along the beach, watching India waking up. On my way south along the beach, I passed numerous fishing boats, including this one, shot at dawn, as the fisherman arrived to start work for the day. 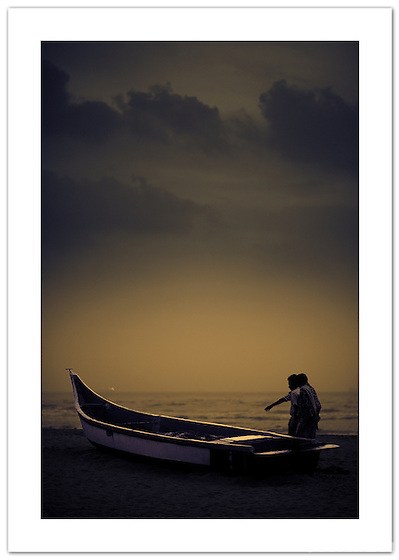 I made this second image at the opposite end of the day, this evening at dusk in the Alwarpet area of Chennai. I nearly left my camera in the hotel, as I was on my way out to find somewhere to have dinner, and didn’t plan on shooting. As a consequence, I didn’t have my fastest lenses with me, nor my flash and Trigrip diffuser, which were also back in the hotel, all of which would have been useful for making images in the fading daylight and shady narrow residential lanes of the city. In order to make this shot in very low light using the 24-70 mm f/2.8 lens I had with me, I had to push my ISO to 3200 and shoot hand-held at f/2.8 and one sixth of a second. To increase my chances of a ‘keeper’, I shot several frames in burst mode, and got this one sharp frame.

As I have mentioned before, the problem in India can often be keeping people out of your frame, rather than persuading them to be in it – particularly when it comes to photographing children, who generally love to be in the shot. However, tonight I was able to photograph this boy alone, sitting on the steps outside his home, without both of us being mobbed by his siblings and friends.

I am drawn to the primary colours in this photograph: the warm, weathered yellows of the wall; the blue-purple of his shirt; and the red of his shorts and the car.  But most of all, his natural, happy smile, and his ‘Noddy’ t-shirt  ;) 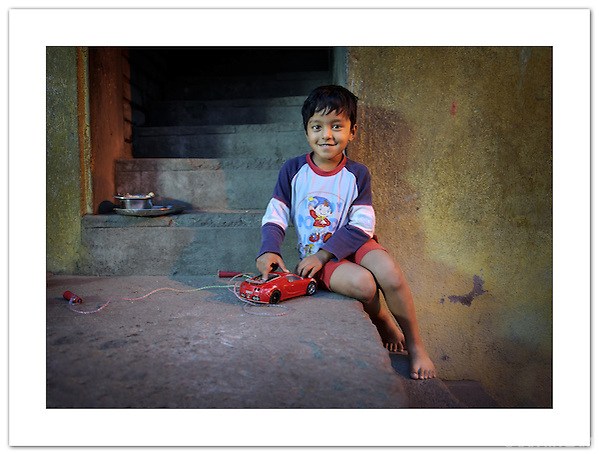 This is likely to be my last post of 2011, so I’d like to wish you a wonderful Christmas, wherever you may be, and a healthy, happy and peaceful 2012.