City Lights in the Arabian Night

Dubai is a city which showcases some of the most spectacular modern architecture to be found anywhere in the world. The views of these incredible – and often beautiful – man-made structures emerging from the heat and dust haze of the Arabian desert landscape on the shore of the Persian Gulf often lead me to imagine that I am looking at a scene from the future: a city rising from the dust of a post-apocalyptic desert. In terms of photographing modern architecture and cityscapes, for me at least, it doesn’t get any better than Dubai. Photographically speaking, the only thing I miss are clouds, as there’s normally not whole a lot going on in that Middle Eastern sky to keep it interesting – just blue, blue and yet more burning blue (did I mention blue?).  Don’t misunderstand me – I am partial to a blue sky, particularly as they are not ten-a-penny in my native England – but in terms of making a photograph, city skies are generally more captivating with a few of the puffy white things in ’em.  A possible solution to the blue-sky-no-cloud problem is to shoot at dawn, sunset or twilight, when the sky may be suffused with varying shades of colour.

When I made this photograph, it was almost night, and I had the feeling of viewing a scene from a neo-noir movie – a dystopian city state in a Brave New World, like something from the film Blade Runner, and this is the mood I was hoping to communicate here. I could almost picture Rick Deckard (A.K.A. Harrison Ford) hurtling between the buildings in a “Spinner“, and I started looking furtively over my shoulder for replicants – although to be fair, maybe I had already downed one drink too many in the hotel bar.

The spire of the Burj Khalifa – currently the tallest man-made structure in the world – is visible in the distance, on the left of the frame. 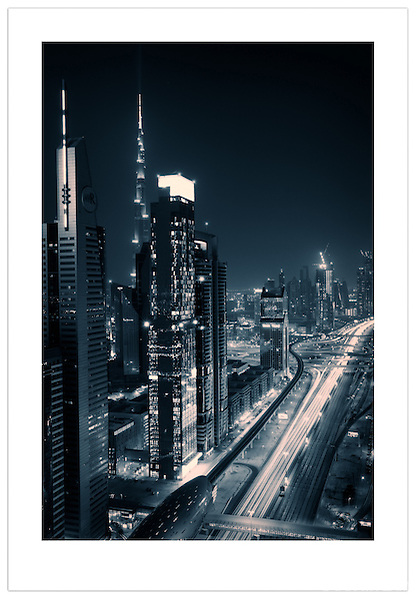