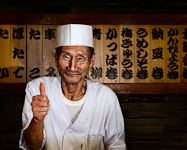 Flashing the Sushi Chef (Raw Flash with my Raw Fish) 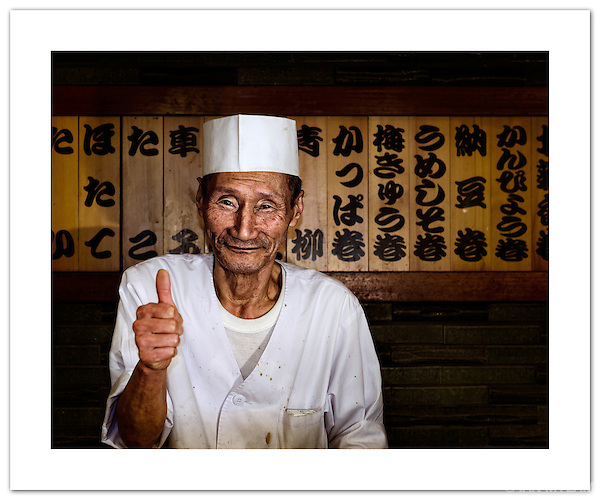 I am in Japan for three days this week, in the city of Yokohama, south of Tokyo in the Tokyo Bay area.   I found a wonderful sushi restaurant for dinner tonight – the sushi was expertly prepared by the chef in the photo here.  He only spoke a handful of English words, and unfortunately my Japanese is a level below that (i.e. it’s non-existent), but I was able to communicate non-verbally that I’d like to take his photograph and he kindly obliged me.

First, however, he wanted to inspect my camera.

“Aah……     Nikon! …   Number One!” he said, eyes twinkling, clearly gratified that my camera was Japanese (I am pretty sure that Canon or any other Japanese make would have elicited the same joyful and humorous response), and gave me the thumbs-up sign.  We both grinned, and in the moment of connection facilitated by shared good humour, an element of the universal human language, I raised the camera quickly to my eye, focused, and triggered the shutter.

Why did I make this photograph?

I was attracted both to his wonderful, lined face, which was full of character and good humour, and also to the wooden strip with Japanese characters on it running horizontally on the wall behind the kitchen area.  I thought this wooden strip would make a nice graphic background element for a portrait as well as helping to provide some contextual information.  Together, the wooden strip with Japanese writing and his face said “Japan” to me.  I envisaged forming a ‘T’ shape with the chef and the wooden strip juxtaposed so that his face was at the intersection of the lines of the ‘T’ – as you see in the picture above.  The picture you see here is more or less the picture I had in my mind’s eye when I conceived it perhaps twenty minutes before I shot it, and is the combination of the raw image captured by the camera and appropriate post-processing to fully align the raw capture with my vision for the photograph.

It was pretty dark in the restaurant, so I guessed that I would need to blend some off-camera flash with the ambient light to get a decent (as opposed to a desperate) exposure.  Using flash would also allow me to control the exposure of my subject – the chef – independently of the background – and that is a good thing, as it offers more creative possibilities.  I was on my own, with no assistant, nor a stand to put the flash on, and no light modifiers – all I had in my camera bag was one naked SB-700 Speedlight and some coloured gels.   Probably a blessing, as I don’t know how well it would have gone down if I had started setting up strobes on light stands in the restaurant – so I simply placed the Speedlight on the counter to my right using the small plastic foot supplied with the flash, angled it towards his face, and gelled the flash with a full cut of CTO (‘Colour Temperature Orange’) gel to give me a better chance of blending the colour temperature of the flash with the ambient tungsten lighting.  My goal was to lose the flash as far as I could in the exposure – ‘flash by stealth’ in other words – I didn’t want a very obviously flash-exposed shot, as that would have killed the low-light mood of the environment.  The flash needed to slip unnoticed, like a thief, into the scene.

I shot this in manual exposure mode, making a few test shots of the background before the chef re-appeared, as he would undoubtedly have wondered why I was photographing his kitchen wall.  I chose 1/60 sec. at f/4 and ISO 1000, which gave me around one stop of under-exposure for the ambient light reflected from the background.  I chose to deliberately under-expose the background relative to the metered exposure because I wanted to communicate the darkness of the restaurant and also saturate the green and orange colours of the wood and tiles behind the chef (under-exposed colours always appear richer and more saturated; over-exposure results in washed-out colours, which communicates a different mood).

I selected an aperture of f/4 with the intention of giving me sufficient depth of field for his face while causing the Japanese characters on the wall to soften slightly.  Writing of any kind – even when unintelligible – draws the eye, and I wanted the characters to be recognisable to give contextual clues and allow them to provide an interesting graphic element in the background while simultaneously softening them sufficiently to prevent immediate visual competition with my subject, the chef.  The eye needs to be able to ‘rest’ on his face, in between moving around and exploring the rest of the frame, and that is facilitated by having the face as the sharpest element in the frame.  With the benefit of hindsight, I could have chosen an even wider aperture (e.g. f/2.8) to soften the characters further, as he was close enough to the wall behind that the characters are still fairly sharp – but I only had time to make a couple of frames as he was busy working and I didn’t want to take up any more of his time – he might have assaulted me with a dead tuna.

Having chosen my f-stop, I then chose my ISO and shutter speed to control the ambient-light exposure.  I wanted a shutter speed I could comfortably hand-hold without fear of camera shake blurring the ambient-lit background (slightly defocused Japanese characters in the background equals good; completely blurry Japanese characters equals bad).  The focal length for this image was around 50 mm, so 1/60 sec was a reasonable shutter speed to aim for with a hand-held exposure, particularly after a couple of beers.  ISO 1000 gave me a metered exposure of 1/30 sec. for the background – I therefore set 1/60 sec. in order to underexpose the background by one stop.  In terms of digital noise and high ISO, the sensor used in the Nikon D3 and D700 performs excellently up to ISO 3200 and beyond, so I was confident of obtaining an image with little digital noise at this ISO setting, provided that my exposure was correct.

Having locked down the ambient-light exposure at -1EV relative to the metered exposure, I turned my attention to the flash exposure.  The off-camera flash used to illuminate the chef was triggered via wireless TTL using the pop-up flash on my D700 in commander mode with zero flash exposure compensation.  TTL, rather than manual, flash was the way forward for me here as I only expected to be able to make a couple of frames at most, and the advantage of TTL is that it puts you in the exposure ballpark from the word ‘go’.  Given time to play and refine the flash exposure, manual flash mode would also have been an option.  The flash was fairly close to the lens axis and was zoomed to 120 mm in order to minimise light spill on to the background.  It was punchy light rather than pretty light – but soft light just wouldn’t have been right for this face full of wonderful character.  Zero flash exposure compensation was just a starting point – but as I didn’t have the opportunity to make any more frames and refine the flash exposure, that was also the final flash exposure.  If I had been a little smarter, I might have boosted the flash exposure a little more right out of the gate.  Why?  The chef is wearing predominantly white clothing, and with the SB-700 Speedlight positioned only an arm’s length from the lens axis, the camera meter is seeing a lot of reflection from the predominantly frontally lit subject.  The camera’s brain responds to this brightness in TTL mode by reducing the flash exposure as it assumes the subject – the chef – is a mid-grey colour (meters always assume everything they see is mid-grey), and deduces he is therefore over-exposed.  However, unlike the camera meter, we know that he is wearing white, and a higher level of reflected light is therefore to be expected.  Had I been thinking more quickly, I might therefore have anticipated that the camera would slightly under-expose my flashed foreground subject, and I could have compensated for that by overriding the camera’s decision and boosted the flash exposure slightly before making my first frame.  Not an issue in the studio where you can iterate towards your perfect exposure – but worth thinking about in a situation where you need to get a good exposure first-time, because it is the only time.  Fortunately, when shooting RAW, there is a fair bit of latitude in the image file, so that you can adjust the exposure slightly in post-production – but it’s always worth striving for the best possible exposure in camera, as it will result in the best-possible quality image.

Why are there two Catchlights?

If you look closely (clicking on the image will open a larger version), you may be able to see two separate catchlights in his eyes: a smaller, central one, and a larger, brighter catchlight to the right and slightly lower.  If I only used a single flash unit, then why are there two catchlights?  The smaller, central catchlight is caused by the pre-flash of the pop-up flash on the camera used by the Nikon CLS to calculate exposure in iTTL mode, which in theory does not contribute significantly to the exposure, but can occasionally cause your subject to blink as the shutter opens if he or she has eyelids on a hair-trigger. The larger, brighter off-centre catchlight is from the exposure-making pop of light from the SB-700 Speedlight frame right, triggered by the camera pop-up flash.

What would I do differently, if I had the chance?

If I had had the luxury of more time, I would have liked to have tried placing my SB-700 Speedlight a little further off to one side, in order to create more shadow and three-dimensionality in his face.  This would also have helped to minimise direct reflections from the lacquered wood and ceramic tiles behind the chef, the worst of which I had to remove in post.  By lighting the chef more obliquely, no direct reflection (‘glare’) would have been visible at the camera position – only diffuse reflection from the wood and tiles would be visible.  Diffuse reflections are what I wanted to see here from the background, because diffuse (indirect) reflections communicate colour information, but produce no glare.  The absence of glare allows the Japanese characters to be clearly seen, as well as the colour of the wood and the tiles on the wall.

Also, as already mentioned, I would also have preferred a shallower depth of field to soften the Japanese characters on the wall further.  However, there just wasn’t the opportunity to refine my set-up, as he needed to get back to work.

Finally, in an ideal world, it would have been nice to spend more time with this guy, getting comfortable, and making more photographs together.  Although I do like this photograph, I am sure it would then have been possible to make some better photographs with some varied and candid expressions.

I guess I’ll just have to visit another time for some more fabulous sushi.