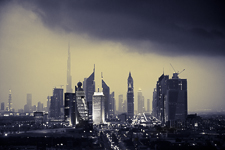 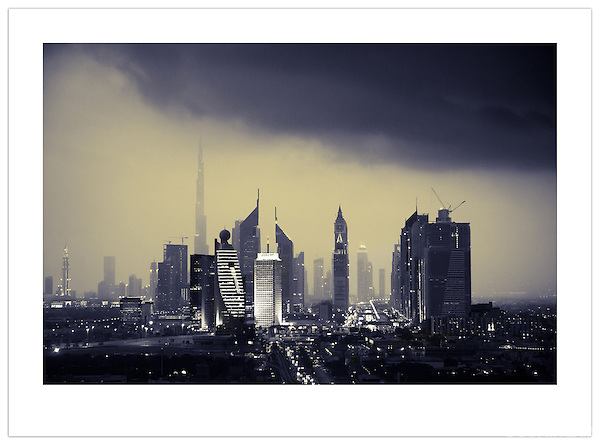 I arrived back in Dubai late this morning after a night flight from London, having flown from Copenhagen to London yesterday afternoon.  After a couple of hours sleep, I flung back the curtains in my hotel room (well, actually they were electrically operated, but you get the idea), to see an unfamiliar sight: Dubai under torrential rain with ominous dark clouds racing across the sky.

I had planned to do some cityscape/architectural/abstract photography this afternoon and evening somewhere in the environs of the city, but even with a rain cover for the camera and lens (which, given that it was Dubai, I hadn’t even brought with me), it would have been hard-going in rain of this intensity.

I was determined to come up with some kind of picture, so I wandered up to the pool deck of my hotel, situated on the roof.  It was already getting dark by this time – after sunset, and owing to the dark skies, the light levels were dropping quickly.  By the time I had my camera out of the bag, lens and lens hood on (to protect the front element from the rain), it was ISO 3200 dark.  The EXIF for this image, shot at a focal length of 100mm, was 1/30 sec at f/5.6, ISO 3200.  Fortunately the Nikkor lens I was shooting with had Vibration Reduction (Image Stabilisation in Canon-speak), so hand-holding the camera with a shutter speed of 1/30 sec was no problem, even with the lens racked out to 100mm.

I made this image in a brief respite when the rain slackened off for a couple of minutes.  I had time for half a dozen frames before the rain began hammering down again, and I had to get the camera under cover and dry it off.  By the time I returned to my room, the thunder was already rumbling in the dark sky.