I arrived in San Diego, California, last night, and spent the afternoon in La Jolla, wandering along the beach, scouting for possible locations for sunset/dusk photography.  I had almost given up hope of finding anything when I found the following composition just as the sun was setting.

As this image was cropped to a panoramic format it doesn’t fit well within the width of the blog page here, so I’d recommend clicking on the image below to see a larger version. 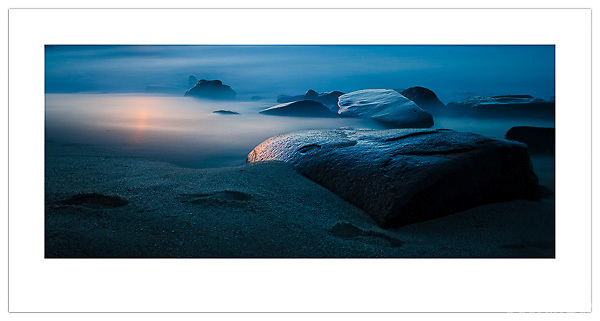 I used a combination of a Singh-Ray Vari-ND filter together with a Lee Big Stopper ND filter to slow the shutter speed from around 1/50 second to five minutes in order to blur the movement of the water.  The combination of the two ND filters gave me a reduction of 14-15 EV in the amount of light transmitted to the camera sensor, and also introduced a blue colour cast into the image.  This colour cast is typical of long exposures with the Lee Big Stopper, and results from the effect of the material from which the filter is made on the transmission of specific wavelengths of visible light during a very long exposure.  The colour cast is easily removed in post-production, but in this case, I liked the combination of the warmth of the last rays of the setting sun against the cool blue of the rocks and water, and decided not to eliminate it.  Shooting with the camera white balance set to ‘daylight’ further enhanced the blue mood; the photograph was made almost at the onset of dusk when the sun was very low in the sky, and most of the illumination came from the sky itself, giving a strong natural blue shift to the light.  As I shot in raw image mode I could have corrected this in post by selecting a white balance of ‘shade’, but chose to leave the white balance set to ‘daylight’ to emphasise the onset of dusk and the so-called ‘blue hour’.

The tide was coming in pretty fast, almost lapping at the tripod legs which were set very low in order to get the camera and lens just above the level of the sand for a low viewpoint.  I was on a rapidly dwindling strip on sand with a cliff behind me, counting down the seconds to the end of the exposure, wondering whether my gear was going to get a salt-water soaking, as my boots had done earlier in the day when a big wave caught me by surprise.  Fortunately, although I only had time to make one exposure, the gear remained dry and I got my shot.