With 48 hours to kill in Las Vegas over the weekend, I decided to rent a car and head out of the city to Zion National Park in the neighbouring State of Utah. I had hoped I might get to the Park early enough on Friday evening to scout for a good location for some photography either in the hour before or after sunset, but by the time I arrived following a delayed flight from London, it was too late for that. I woke early on Saturday to the sight of heavy rainfall and overcast skies over Zion. Fortunately the rain eased off, and so I decided to hike up to Observation Point, a six-hour round trip from the floor of the valley at Weeping Rock. Although I was glad that the heavy rain had eased, I was happy to see the clouds – firstly because I generally like to photograph skies with clouds in them, and the sight of them swirling around the peaks was promising; but also because the cloud cover took the sting out of the fierce summer Utah sun, making a long hike upwards carrying a camera backpack and tripod a lot more pleasant than it would have been under open skies in temperatures close to 40°C (100°F). It was my first visit to any of the parks in the South West of the United States, and I was stunned by the beauty, majesty and drama of the scenery. Zion truly is jaw-droppingly beautiful: a range of jagged mountain peaks of a beautiful orange-red colour, like something out of a child’s picture book, with a multitude of impossibly narrow vertiginous canyons, rivers and waterfalls scattered over the Park. I made this photograph a couple of hours into the hike. 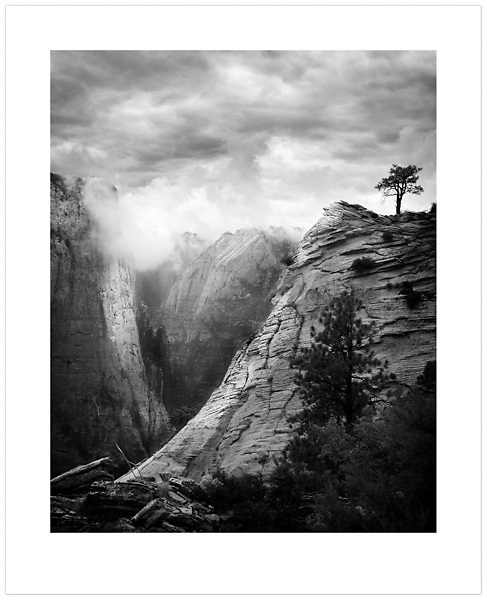 The lone tree on the top of the ridge caught my eye together with the clouds swirling around the tops of the peaks, and the conjunction of lines formed by the rock faces made for a pleasing composition, with the light and shade resulting from the diffused sunlight illuminating the rock faces helping to give a sense of three-dimensionality to the scene. I cropped the image from the camera’s native 3:2 format to a slightly squarer 5:4 format and composed the image vertically, in sympathy with the strong vertically oriented lines of the mountains which serve to lead the eye up through the image to the swirling clouds and the tree on the ridge on the right. This image was for me not about colour, but rather about the lines, tonal variations and shapes, and in particular, the silhouette of the tree on the ridge. I therefore decided to convert the image to black & white, as I felt that the lines and tones in the photograph were more obvious without the distraction of colour.

This next couple of images were shot at various points on the hike up to Observation Point: 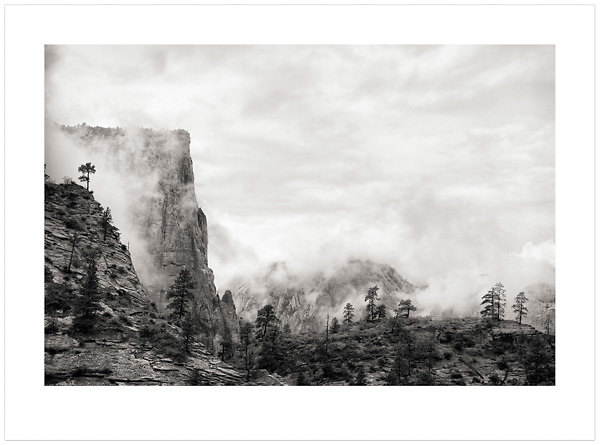 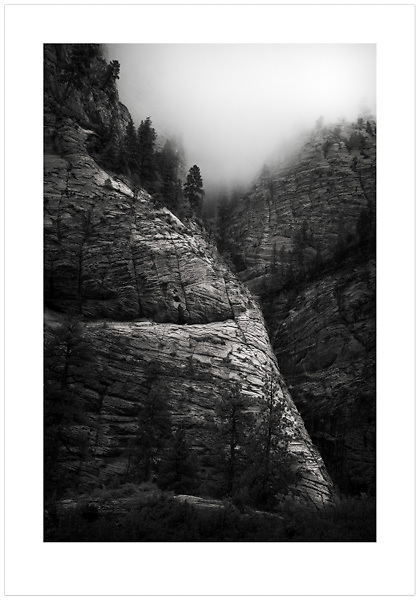 By the time I reached the top, the cloud base had lifted and the sun had broken through, and much of the mystery and intrigue created by the swirling low clouds had gone: I struggled to make anything other than postcard images of the view, spectacular though it undoubtedly was.  However, just to prove that I did actually make it all the way up, here is a photograph made at the top at Observation Point: 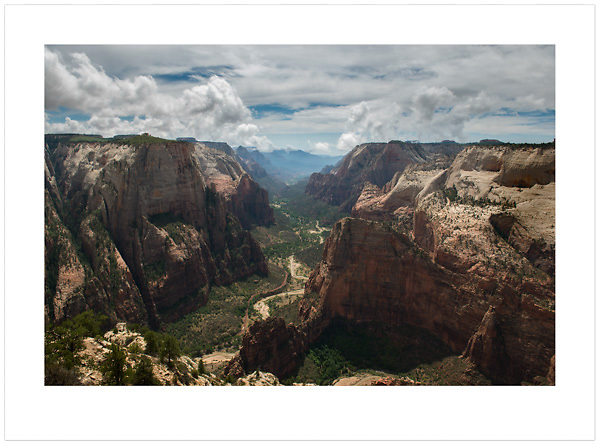 Finally, here’s a shot looking south from roughly overhead the Hoover Dam taken from the cockpit following an Eastbound take-off around sunset from runway 07L at Las Vegas McCarran Airport, bound for London. Altitude was around 17,000 feet (5,000 metres). The Arizona/Nevada State border runs southwards along the river visible left of shot. 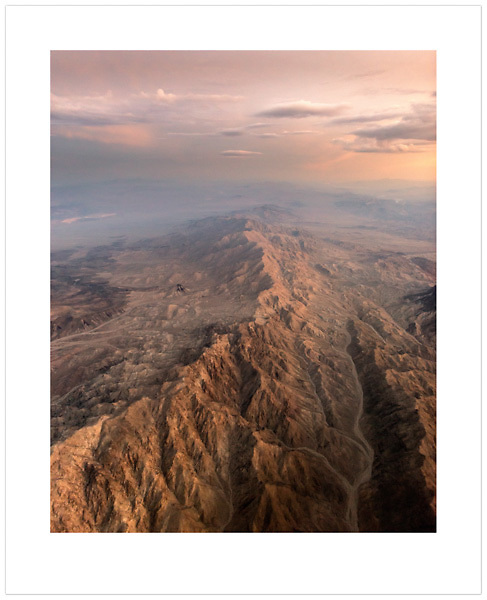