Mail
Photographers of the world, beware! 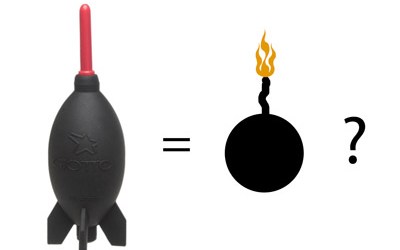 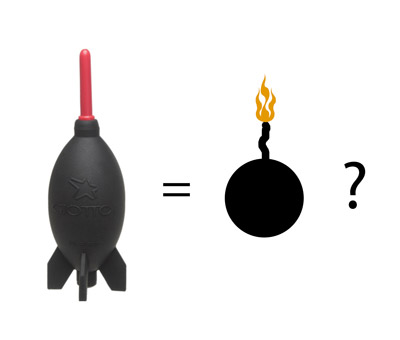 Today, I had my Giotto Air Rocket Blower – a mighty dangerous-looking dust removal accessory for camera lenses and equipment (see picture) – confiscated on passing through Heathrow Airport Security at Terminal 5 because ‘it might be mistaken for a bomb’. Really? If Heathrow Airport Security are looking for bombs in hand luggage which look like this, perhaps we’d all be better off staying at home!

I showed the security officer how it works (puff! puff! puff!). He was unimpressed, and referred the matter to his supervisor. I was confident that sanity would be restored – but no! – the supervisor also solemnly agreed that it might be perceived as a bomb, even though he agreed it wasn’t actually, you know, dangerous, and insisted on confiscating it.

I mentioned that I have carried this thing with me in my hand luggage on thousands of flights to hundreds of airports all over the world over a number of years, and not one security officer – including at that fortress of airport security, London Heathrow – has ever leapt back in alarm at the sight of it. I also tried to make the point that terrorists boarding aircraft with explosive devices generally try to disguise them a little better (e.g. hiding them in shoes, etc.), and that anything so obviously rocket-shaped as my beloved Giotto Air Rocket Blower was unlikely to be part of the bad guy’s bang-bang kit – not to mention seriously uncomfortable to secrete inside your shoes for extended periods.

The security officer explained that with his previous army and police training, he could assure me that bombs did indeed look just like my Giotto Air Rocket Blower. (Yes, officer, but bombs that look like that are normally slung under the wings of aircraft, or fired from ships, fighter jets or missile silos – not smuggled on to aircraft in camera bags…)

In a last desperate attempt to win him over to the beautiful yet functional rocket-shaped design, I explained that the blower – a classic  – has a long, thin nozzle featuring an opening designed to eliminate whistling which can also be removed for cleaning, and that the non-return valve on the bottom sucks in clean air and does not re-distribute dust. The fins enable the blaster (oops, sorry, bad choice of words, officer!) to stand up on its own and can also be set on its side on a flat surface without rolling.

Sadly, he was adamant that the trusty Giotto Air Rocket Blower was to be mine no more! I imagine that at this very moment they have placed it in a lead-shielded enclosure inside a concrete bunker and are detonating it remotely.

So, photographers of the world, beware! – do not pack your Giotto Air Rocket Blowers in your hand luggage!