Mail
A One-Light Self-Portrait (Bringing the Sun back) 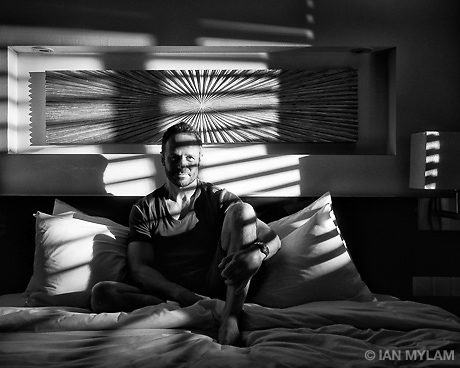 I am in Malé, the capital of the Maldives, and it’s raining outside. Raining very hard in fact. I had planned to spend the day visiting an island, swimming, snorkeling and generally relaxing on the beach, but that’s definitely a plan for another day. I consider the possibility of making pictures on the busy streets of Malé in the rain, but this is a proper tropical downpour, turning the streets into rivers and sending people running for shelter. Even the ever-present motorbikes and mopeds, which buzz through the narrow streets of the town, are almost silent. Not really a day for venturing outside with the camera then either. My Fuji X-T1 camera may be weather-sealed, but the four Fuji prime lenses I have with me are not. The Fuji X-T1 combined with any of the ‘X’-series prime lenses is light enough that I could comfortably shoot one-handed and hold an umbrella in my free hand to protect the lens from the rain. Unfortunately, however, I realise I have left my shooting umbrella at home, since I was thinking ‘beaches and sunshine’ rather than ‘tropical rainstorm’ when I left London.

I decide to pass the time by shooting a hotel-room self-portrait while waiting for the rain to stop. I want low, late-afternoon sunlight streaming into the room. The reality is a dark, thundery sky and rain lashing the window in torrents. Now, if only I could make the sun come back…

I notice that the sleeping area of my hotel room is separated from the bathroom by a glass panel with some Venetian blinds hung in front of the glass. It occurs to me that I could photograph myself in the bedroom with an off-camera flash located in the bathroom, firing through the blinds and the glass to mimic sunlight flooding through a window, and create some interest and drama with the patterns of light and shade thrown by the blinds. The fact that the ‘window’ is in reality simply a glass partition inside the room with the (windowless) bathroom on the other side, and the only real window is actually at the other end of the room (camera left) is something that need not trouble the viewer of my portrait. I resolve to create an alternative version of reality with a ‘window’ on the right side of the image which has sunlight apparently coming through it, modulated by the slats of the Venetian blinds.

The room is pretty small, and there’s really only one location for my subject (i.e. me), which is sitting on the bed. I set up my tripod at the foot of the bed together with the Fuji X-T1 camera and Fuji XF 23mm f1.4 R lens (35mm full-frame equivalent focal length) which gives the framing I want.

The next step is to kill the ambient light – I decide that want a high-contrast image full of drama with strong areas of light and shade created by the flash illumination firing through the slats of the Venetian blinds. Any ambient light entering the room from the real window camera left will only serve to reduce that contrast – and hurt my picture. So I close the curtains more or less fully – just leaving me enough illumination to work by – and set the exposure (aperture, shutter speed, ISO) on my camera to kill the remaining ambient light leaking in around the edges of the curtains. I am now working 4-5 stops over the ambient exposure, and a test frame shows that my picture is a beautiful solid black. I can now begin to re-build my exposure with flash.

I mount my light – a Godox Ving V860C Li-Ion flash – on a Justin clamp – or to give it it’s proper name, a Manfrotto 175F Justin Spring Clamp – and clamp it to the top of the shower door, angling it down to mimic sunlight, and aiming it through the blinds towards the head of the bed where I am intending to sit. I wanted the sunlight to have a late afternoon feel to it, so I gel the strobe warm with a ¾-cut CTO and set the camera white balance to ‘fine’. (In the end I decided that the image was stronger in black and white, but at this stage, I was thinking of either a colour image or a black and white image, and was keeping my options open by gelling for the colour temperature of light I wanted.)

I mount a Cactus V6 radio transceiver on the camera, and another on the flash. The beauty of the Cactus V6 is that although it doesn’t support TTL, it is possible to adjust the flash power at will from the camera position without having to repeatedly return to the flash unit to do so – and it supports a wide range of flash units from different manufacturers. I start to experiment with firing the flash through the Venetian blinds, to see what pattern I am getting from the blinds, but the light is spilling everywhere inside the room – not what I want – so my first job is fix a ⅛-inch Honl grid over the head of the flash to corral the light. Next I adjust the slats of the blinds for several minutes until I see a pattern on the wall behind the bed that I like and which I believe will give me a strong composition.

Having set the light position and adjusted the slats of the blinds to create a pleasing pattern of light and shade on the wall and bed – and hopefully on me – I now need to adjust the flash unit to give a good exposure. The flash is about 3 metres (10 feet) from the head of the bed, and the combination of the CTO gel, the Honl grid and the slats of the blinds eats a lot of flash power. I find that I need to set the flash to somewhere between half and full power in order to get my whites (namely the wall behind me) white. Fortunately the Lithium-Ion battery in the Godox flash is good for around 650 pops at full power on a single charge, which is just as well, as I don’t have the battery charger with me.

Finally, I set the self-timer on the camera, pre-focus on the area where I am going to sit, and make some test exposures. This is the hard bit, leaping from camera to bed and back again to check the result on the LCD. Right now, I wish I was shooting tetherless. I am aiming for a composition where the shadows from the blinds fall across my face, but with my eyes – and also ideally my mouth – in a band of light. I also want to use a split-lighting pattern on my face, since this is a dramatic, high contrast image, and a split-lighting pattern is ideal for underpinning that mood.

I make a series of exposures, occasionally reviewing the results on the LCD screen on the camera, until I am confident that I have what I want.

I’ll close with a look at the colour version of the same image, to show how the combination of ‘daylight (fine)’ camera white balance with a ¾-cut of CTO gel on the flash helps to create the illusion of late-afternoon sunlight. I like the warmth and the mood of the colour version, but the graphic drama of the black and white image is my favourite of the two. 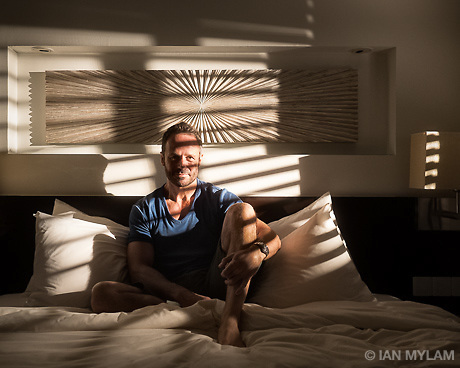 Leave a Reply to John Hagar