One of my all-time favourite photographs is entitled ‘First Snow, Elizabeth Street’ by American photographer Jay Maisel. It depicts a street scene in New York as the first snow of the year begins to fall. The street scene is transformed into something magical by the falling snow. I have looked at that photograph many times since I first saw it, and I still find it magical.

A few weeks ago, I spent twenty-four hours in New York City around the time that the East Coast of the U.S.A. was bracing itself for the much-publicised arrival of heavy snowstorms.

In a world in which cameras or at least camera-equipped phones are ubiquitous, in which travel has become cheaper and easier, in which no corner of the world seems undiscovered, in which everything seems to have been photographed and in which we are bombarded with dozens or even hundreds of images daily, it is very hard to find a new perspective on a familiar place – particularly a place as familiar and photographed as New York City. Snow visually transforms both the air it passes through and what it falls upon, and its presence in the air and the reflectance it brings to the ground also modifies the light illuminating a scene. It thus has the power to transform the familiar into something unfamiliar, interesting and magical. Which is why I was hoping for snowfall in New York.

I’m not suggesting that no-one has ever made photographs of New York in the snow – of course there are many such photographs – but the fact is, most people only think to use a camera when the weather is pleasant. Simply making the effort to go out and make pictures in bad weather is one way of giving your images a fighting chance of standing out and being a little more interesting than the majority of images made before of that subject or in that place. A bad photograph in bad weather is still a bad photograph, but I believe that you can sometimes swing the odds in your favour by making pictures when most people are running for cover, and elevate a good photograph to something special. Perhaps it is because when the weather is bad, most of the time we are so intent on escaping from it that we don’t stop to really look at how it transforms the familiar, everyday world around us. We look but don’t see, and this is even more likely to occur when we are cold, wet, uncomfortable, and in a hurry to get wherever we are going.

Unfortunately for me, the weather remained stubbornly fine for most of my stay in New York. In the last hour before I was due to leave my hotel for the airport to fly to London, when I had more or less given up on seeing the white stuff, the much-heralded snow suddenly began to fall. It wasn’t the ‘Snowmageddon’ predicted by the U.S. weather forecasters, but it was a respectable snowstorm nonetheless. I grabbed my camera and one lens, and headed out of the hotel and made these pictures in the space of forty-five minutes before it was time to head for JFK Airport and my flight to London. In my haste, I forgot my gloves and spare batteries for my camera. It didn’t take long before my fingers were numb, and holding and operating the controls on the metal camera body in the sub-zero temperature was difficult. Then the single battery I had in the camera ran out of charge, at which point I had to return to the hotel earlier than I would have liked to. Fortunately by then I had a few photographs on my memory card.

Not quite ‘First Snow, Elisabeth Street’ – but I hope these photographs capture something of what it felt like to be walking the streets of New York in the falling snow. 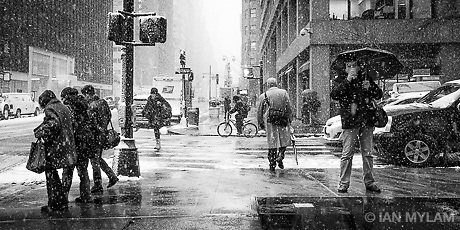 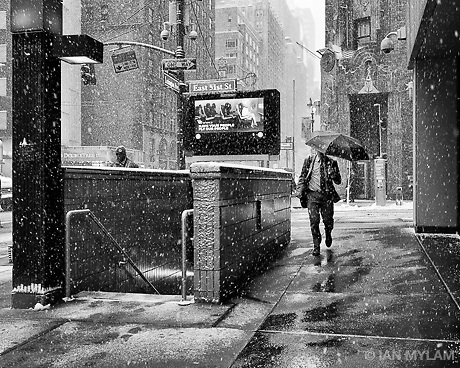 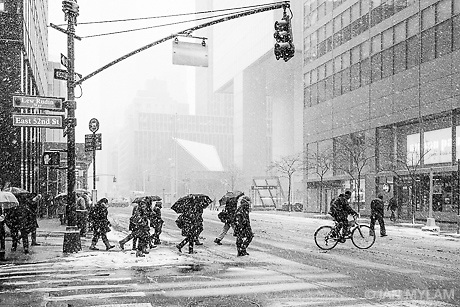 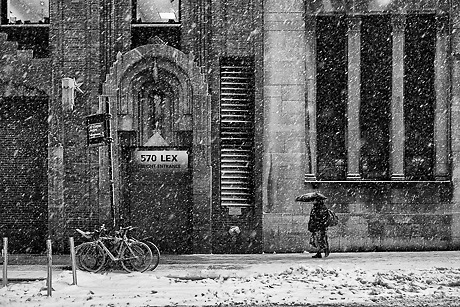 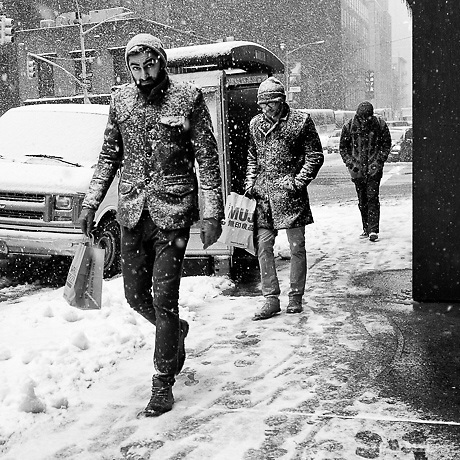 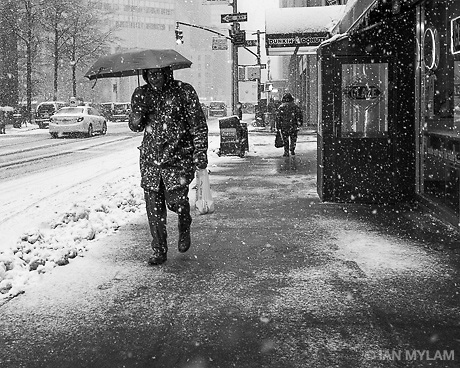 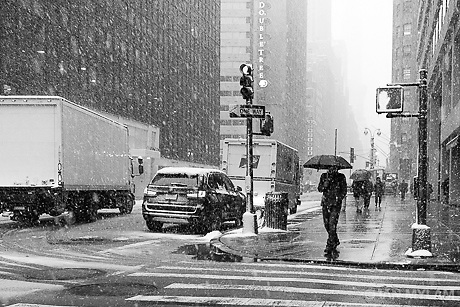 “So all night long the storm roared on:
The morning broke without a sun;
In tiny spherule traced with lines
Of Nature’s geometric signs,
In starry flake, and pellicle,
All day the hoary meteor fell;
And, when the second morning shone,
We looked upon a world unknown,
On nothing we could call our own.
Around the glistening wonder bent
The blue walls of the firmament,
No cloud above, no earth below,—
A universe of sky and snow!”