In a world in which cameras or at least camera-equipped phones are ubiquitous, in which travel has become cheaper and easier, in which no corner of the world seems undiscovered, in which everything seems to have been photographed and in which we are bombarded with dozens or even hundreds of images daily, it is very hard to find a new perspective on a familiar place – particularly a place as familiar and photographed as New York City. Snow visually transforms both the air it passes through and what it falls upon, and its presence in the air and the reflectance it brings to the ground also modifies the light illuminating a scene. It thus has the power to transform the familiar into something unfamiliar, interesting and magical. Which is why I was hoping for snowfall in New York. One hour before I was due to leave the city to fly to London, the snow started to fall... 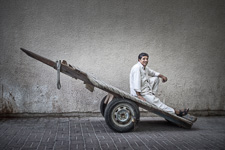 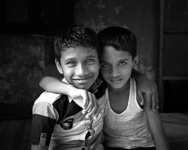 Just a quick post to share a few pictures – and some smiling faces – from the streets of Mumbai where I have been this week. Enjoy! 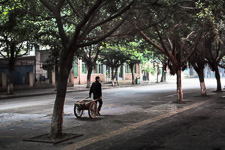 A quick postcard from Chengdu, China, where I am for the next couple of days. I was out very early this morning wandering the streets – it was misty and raining gently, but was beginning to brighten up by the time I made this photograph just a couple of streets away from my hotel. Apparently, […]