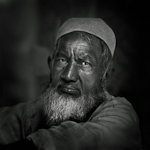 Delhi is a city which fascinates me. As Tarun Tejpal, of in the Indian weekly news magazine India Today, writes: "Delhi has more layers of culture, civilisation and history extant in it than any other city in India, arguably, in the world." Not for the faint-hearted, it is a city which in the summer assaults the senses like few other places on Earth. The noise, oppressive heat, assorted smells, crush, and chaos of Shahjahanabad, the old city, have to be experienced to be believed. Delhi is also one of the most wonderful places - perhaps my favourite place - to make street portraits. These portraits were made in the only area of Delhi which has survived from the city of Tughlukabad - the Delhi of the Middle Ages. 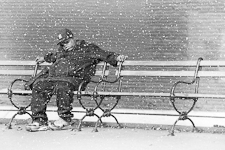 This shot is also from New York – this time, a candid grab shot of a guy ‘chilling out’ on a bench in Manhattan. I’m not sure whether he was actually asleep or just deep in thought – hard to tell with those shades on – but either way, definitely a man who knows the true meaning of the word relaxation. 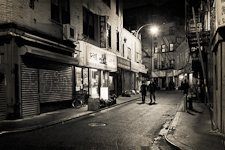 This week, I’m in New York City, a city which – like my home town, London – I never tire of. I took a walk through Chinatown, an area which I have somehow contrived to pass by, but not through, on previous visits. It was a rainy, cold, windy night, and I endured maybe an […]

This image was shot at a Sufi shrine in Old Delhi, India. On this day, I set out with the specific objective of making street portraits. Most of the portrait photographs I made were after asking permission, but this was one of several candid shots I made that day. This man was concentrating intently on […]

I’m in Chennai, India, about to fly to London. It’s a pleasant 29 degrees Celsius here this evening, or if you prefer, 84 degrees Fahrenheit. Either way, a lot warmer than London in December – and Denmark for that matter – which is where I plan to be by tomorrow evening, in time for Christmas, […]